Christine Ockrent is the producer and anchor of the weekly current affairs program France Europe Express on TF3 and of Une fois par mois, a program about international politics, on TV5, the world-wide French-speaking channel. She is also on the editorial board of Metro International and is a columnist for several French language publications. Previously she was editor in chief of the weekly newsmagazine, L'Express. She began her career in broadcast journalism at NBC News and worked for eight years at CBS' 60 Minutes.

One of France's most skilled and knowledgeable news presenters 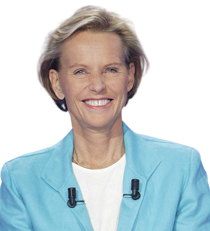 Christine has been awarded several French and International distinctions for her work in TV journalism and has been awarded the French Legion d'Honneur and l'Ordre national du Merite. She is a graduate of the Institut d'études politiques in Paris and studied at Cambridge.

With a wealth of national and international experience in broadcasting and journalism, Christine is an excellent communicator. With an astute insight into the effects of global economics and politics she is able to use her experience to advise and guide decision makers in corporate organisations.

Christine is a highly experienced professional and media commentator and is equally comfortable whether hosting a large corporate event or speaking in her own right.

Christine presents in English and French.

How to book Christine Ockrent?