Adventurer, Author & One of the World's Greatest Round the World Yachtsman

Sir Chay Blyth became the first person to sail non-stop around the world in 1971 aboard the 69ft ketch British Steel. In recognition of his achievement, he was made a Commander of The British Empire (CBE) and was voted Yachtsman of the Year by the Yachting Journalists Association. Amongst his many notable achievements, Sir Chay is recognised as the first person to open the sport of yacht racing to a wider audience, giving people from all walks of life the opportunity to race around the world on equal terms.

"The most outstanding passage ever made by one man alone". The Times 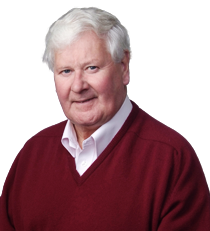 Chay Blyth, born in Scotland, joined the British Army's Parachute Regiment when he was 18 and rose quickly through the ranks becoming a Sergeant at the age of 21. In 1966, Sergeant Chay Blyth, together with Captain John Ridgeway rowed across the North Atlantic from Cape Cod to the Aran Islands in a 20 ft dory. The journey was completed in 90 days and Chay was awarded the British Empire Medal (BEM).

Sir Chay draws upon his experiences and adventures to inspire audiences as he describes in great detail the challenges and achievements of his truly incredible life. As chairman of Challenge Business, he was the mentor for Dee Caffari on her successful bid to be the first woman to sail around the world against the prevailing winds and currents in 2005/6 and his insights into modern adventuring challenges are highly insightful and sought-after at prestigious events worldwide. He continues to play an active role in international sailing events and competitions.

With a wealth of anecdotes and an incredible story to tell, Sir Chay is a truly unique personality who entertains and motivates audiences with his amazing presentations.