Carl Bildt is Co-Chair of the European Council of Foreign Relations. Since 2021 he has been the World Health Organisation's Special Envoy for the Access to COVID19 Tools. Previously, Carl Bildt served as Sweden's Prime Minister from 1991 to 1994, Foreign Affairs Minister and chaired the Global Commission on Internet Governance. 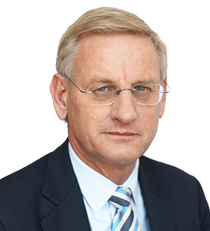 Carl Bildt is the holder of various senior honours and decorations from France, Germany, the United Kingdom, Estonia and Latvia. He is associated with international organisations and serves on the advisory boards of the Centre for European Reform, the Aspen Institute Italia and RAND Europe. He has also sat on the Council of the International Institute of Strategic Studies and headed a review of the European Space Agency. Carl Bildt received international acclaim as the key mediator in the Balkans conflict and served as the UN Secretary General's Special Envoy for the Balkans between 1999 and 2001. During his tenure as Prime Minister, he negotiated Sweden's accession to the European Union, signing the agreement in 1994.

Noted internationally for his activities in resolving the Balkan conflict, as a visionary of Europe and an expert on world affairs, Carl Bildt came of age as a thinker at a time when politicians and intellectuals sought refuge from war in the power of international organizations. He offers privileged insights to those who want to place their organisation advantageously for the future. Qualified, robust, and charismatic, he examines leadership in adverse situations and shows how to successfully negotiate at the highest level.

An excellent and engaging speaker, highly respected amongst his peers, Carl Bildt is in demand as a keynote speaker around the globe. He's telegenic, charming, experienced, and ambitious. Savvy when it comes to the media, he has a cunning, deft touch for geopolitics.

Carl presents in English or Swedish.

How to book Carl Bildt?