Brian Blessed is one of Britain's most recognisable actors. He is also an adventurer, explorer and author. He can boast roles in blockbuster movies Star Wars: Episode One and Robin Hood Prince of Thieves on his CV, in addition to acclaimed missions as the oldest man to reach the summit of Mount Everest and the North Pole. 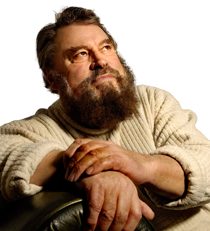 He has lent his musical talents to several productions - from playing Old Deuteronomy in Cats to The Baron in Chitty Chitty Bang Bang. In costumed TV movies he has starred in one of the many Three Musketeers TV versions, I Claudius, Treasure Island and has been a part of various re-enactments including Catherine the Great, Lady Chatterley, The Hound of the Baskervilles and Kidnapped. He has been on three expeditions to Mount Everest, the first to make the film Galahad of Everest, a tribute to George Leigh Mallory, which is perhaps his greatest achievement as it won the Canadian Grand Prix at the 1992 Banff Festival of Mountain Films, and the Bill Mason's People Choice Award.

A highly respected actor and adventurer Brian draws on his extensive and varied experience to inspire and motivate audiences. His imposing stature, booming voice and infectious personality make him a distinguished all round entertainer.

Well used to public attention Brian is a relaxed, confident and professional speaker.

How to book Brian Blessed?