Birgit Prinz has been elected FIFA Women's World Football Player of the Year three times (in 2003, 2004, and 2006) and was voted Germany's "Women's Footballer of the Year" each year consecutively from 2001 to 2008. She scored seven goals for Germany in the FIFA Women's World Cup 2003 as a centre forward and played for the German women's football team at the 2000, 2004 and 2008 Summer Olympics winning a bronze medal at each. 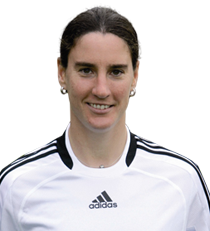 Birgit Prinz was born in Frankfurt am Main, Germany, and after leaving school she trained to become a physiotherapist. She has since played professional football with 1. FFC Frankfurt (1st Frankfurt Women's Football Club) since July 1994. Her impressive international career includes being a member of the UEFA Cup winning team as well as winning the World and European championships.

Using the lessons learned on the football pitch, Birgit Prinz shows audiences around the world the characteristics and skills she has learned to become one of the most successful female footballers of all time. She shows how anybody can apply these skills to achieve their own personal goals in their private and business lives.

A charismatic and inspirational individual, Birgit's presentations are filled with anecdotes and motivational messages from her professional football career perfectly crafted to suit each individual event.

She presents in German.

How to book Birgit Prinz?