Bernd Stange was appointed head coach of East Germany in 1982 after years working as assistant coach and head coach of the Under 21s. In 2001, he was given the opportunity to guide Oman to the 2002 World Cup in Japan / Korea. In 2007, he was appointed by the Belarus Football Federation to coach the national team. 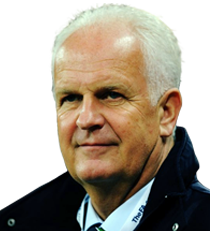 Bernd Stange was called into the East German youth team, however an injury ruined a top-flight career in the game. He continued to play for local side Chemie Gnaschwitz in the lower divisions until 1965 and later spent a year at Vorwärts Bautzen before joining HSD DHfK Leipzig, spending the rest of his playing days there until retiring in 1970. He went into coaching with FC Carl Zeiss Jena winning the GDR league title and the GDR Cup twice. After a successful 6-year spell with the national team, Stange returned to FC Carl Zeiss Jena, now in the unified German Bundesliga and later moved to coach Hertha Berlin.

Bernd Stange is in demand to provide lessons from his time in football at events worldwide, having travelled abroad later coaching in Ukraine and Australia, both with great success. He offers audiences invaluable advice on achieving personal goals and the power of teamwork.

Bernd Stange is a motivational and insightful speaker.

He presents in Turkish & English.

How to book Bernd Stange?