Fondly known around the world as the "Green Sheikh", his mission is to raise global awareness at many levels from developing and empowering youth, supporting and sponsoring orphans to sustaining unfortunate individuals and under-privileged families, through the Al Ihsan Charity he over sees as the Executive President.

"I want to impact people not by saying, but by living." The Harvard Crimson 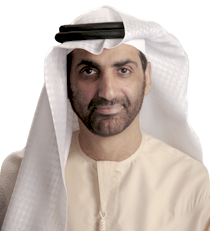 Educated in chemical and petroleum engineering, with an MA in environmental management, and a PhD in clean production and industrial ecosystems, the Sheikh hopes to radically reform education and respect for the environment in the Middle East. He has activated and co-ordinated the formation of environmentally and socially responsible non-governmental organisations. He has created partnerships between public, private and local communities and has advised and raised awareness among decision makers promoting these issues in the media. Appointed Environmental Advisor to the Ajman government and previously International Senior Board Advisor at WANA Forum in Jordan, an honorary member at the Arab Thoughts Forum, both chaired by H.R.H Princess El Hassan bin Talal. The "Green Sheikh" a transformational leader and global campaigner, has been recognized worldwide for his high social and environmental impact activities.

An incredibly successful and sought-after speaker and one of Middle East's most upcoming and fascinating figures, Sheikh Abdul Aziz Al Nuaimi has made a name for himself through a disruptive career in environmentalism and as a youth catalyzer through his inspirational way of being a natural leader. He is considered to be a change agent for Environmental planning and long term strategy on Sustainability in the UAE, leading as a global visionary environmentalist and social campaigner in the GGC countries and the Arab World.

A passionate and engaging speaker, the Green Sheikh travels the world delivering compassionate presentations extolling the virtues of holistic living and the importance of environmental awareness.

He presents in English and Arabic.