Bernard Gallacher was the original young wonder of the PGA European Tour, winning the championship two years after turning professional. Thirteen more titles followed and in 2002 he won the Mobile Cup held at Stoke Poges. Bernard has a distinguished history as one of Europe's premier golfers, having played in the Ryder Cup eight times between 1969 and 1983 and accruing 14 wins on the PGA European Tour. He won the tour's Sir Henry Cotton Rookie of the Year Award in 1968 at the age of 19. The following year he became the youngest winner of the tour's Harry Vardon Award by leading the European PGA Tour Order of Merit.

"An exceptional captain and team leader" 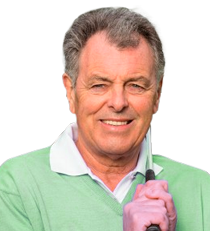 He is a three times captain of the European side in the Ryder Cup matches. He led the European Team to a dramatic victory in the 1995 Ryder Cup at Oak Hill Country Club and also served as European Captain in 1991 and 1993. In recent years, he had been the head professional at Wentworth Golf Club in Surrey, a position he recently relinquished to focus on his playing career. From 1998 until 2008 he wrote a popular column for Scottish golf magazine bunkered and was a media commentator for BBC Radio Five Live.

Bernard presents highly successful corporate golf days. In addition, his Ryder Cup speech is highly regarded as an informative insight into the world's biggest golf event from one of Europe's most successful players/captains.

Always a crowd pleaser, Bernard's presentations are highly entertaining and filled with a wealth of amusing anecdotes from the world of golf.

How to book Bernard Gallacher OBE?