Anil Kumble is without doubt India's greatest Indian bowler of all time - not only in terms of wickets, but also by being a member of the winning team on more occasions than any other bowler in the history of Indian cricket.

"One of the most recognised cricketing personalities" 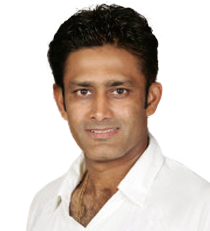 Anil made his debut in England in 1990, raising hopes of resurgence in the art of leg-spin. But it was not until his recall against South Africa sixteen months later that he proved his abilities on the international stage. Since then he went from strength to strength. Be it Test matches or ODIs, Anil has always been a match-winner. He was awarded the Padma Shri, one of India's highest civilian honours, by the Government of India in 2005. Kumble was appointed the captain of the Indian Test cricket team in 2007. Anil is a sports entrepreneur and has co-founded a start-up venture called Tenvic that focuses on providing for sports education and training in mainstream schools across India.

Anil Kumble brings his proven leadership skills into play, drawing from his experience as a former Indian cricket team captain, reputed executive coach and public speaker. By combining his close understanding of motivation and self-development with his personal experiences he consistently inspires, motivates and entertains audiences. He shows how to set goals and take the necessary steps to fulfilling ones potential.

Highly entertaining Anil's tailored presentations are filled with anecdotes from his career.

How to book Anil Kumble?