Adam Rickitt first shot to fame when he appeared in one of UK's favourite television programmes, Coronation Street playing the role of Nick Tilsley. Adam is a Prospective Parliamentary Candidate and political commentator in the media and press, including Question Time, The Big Debate, Sky News, The Daily Telegraph, The Spectator and The New Zealand Herald and is the new full time current affairs blogger for the Huffington Post. He is also appearing in the ITV smash hit The Big Reunion. 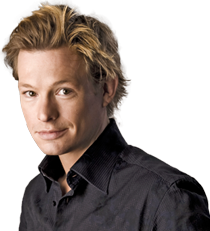 Adam has toured the world with his Gold selling album Good Times. He has had a mixture of high profile roles in the UK, on both stage and screen, including the lead role of "Mark Cohen" in the West End musical Rent and Judge John Deed, before moving to New Zealand for 4 years to appear in Shortland Street. Adam is Director of the Caerus Partnership aimed at increasing Mental Health support in the workplaces. Specialising in communications and fundraising, Adam is a highly sought after professional advising a variety of corporate companies, charities, fashion houses and the British High Commission.

As a keynote speaker, Adam offers a fascinating insight into the world of current affairs and has much to share on the strategic thinking for communication, branding and media campaigns. Adam's inspirational speeches are also drawn from his daily fight for his success despite being affected by the crippling disorder Ankylosing Spondylitis. His witty after dinner speeches are a combination of his life experiences sprinkled with stardust! Adam is an experienced and entertaining host and an engaging mediator/facilitator. With a profiled status he is a draw for any audience, but with the charm and charisma to also credit their attention.

Adam is a witty and conversational host, who has charmed both audiences and clients alike with his particularly polite brand of entertainment. A confident, intelligent and engaging performer, he is in great demand at events all over the country... and can even sing.

How to book Adam Rickitt?