Kit and The Widow

Kit and the Widow are simply two men and a piano. They met in the Cambridge University Footlights and immediately went their separate ways, until they reconvened at the Comedy Store during the dark days of the Falklands crisis. Their stylish musical humour catapulted them into the ozone layer of the theatrical firmament. Ten giddy years in the Edinburgh Fringe culminated when they played at the Royal Lyceum Theatre as part of the official Edinburgh Fringe, the first cabaret artists since Dietrich to do so.

"I left the theatre feeling I had enjoyed an hour or so of civilised fun." Benedict Nightingale TIMES 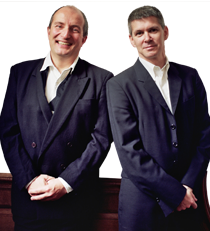 They have toured nationwide, which included dates at the Edinburgh Festival and London's New End Theatre. They have also presented Kit and the Widow's Grand Tour for Radio 4 and made various television appearances - Going for a Song (Kit) and Crosswitts (Widow). They have also recently completed a run of their show Meat on the Bone.

Assured, waspish and witty sophisticates, Kit and the Widow offer intimate cabaret including a full range from 'appallingly intimate' to 'long range, virtually indiscriminate'. Kit and the Widow are a hilarious review duo in the tradition of Victor Borge, they mix wit and satire with re-workings of familiar cabaret songs.

The very dapper Kit Hesketh-Harvey (baritone) and Richard Sissons / The Widow (pianist) give people in the news an acid tongue-lashing with a wonderfully witty flow of frightfully, frightfully funny parody songs and stories, with a stylish musical humour.

How to book Kit and The Widow?