The architect of the EU constitution 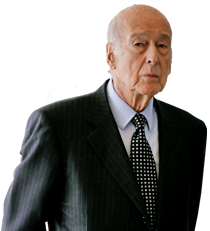 Valéry Giscard d'Estaing was born in 1926 in Koblenz. After serving in the French Resistance, he completed his studies at the Ecole Polytechnique and the Ecole Nationale d'Administration. He then joined the Inspection Generale des Finances in 1952 where he pursued an administrative career until 1956. From 1956 to 1974 he has held numerous elective positions and governmental functions before becoming President.

As a leading figure in the development of the European Union and as a former member of its parliament, President Giscard d'Estaing has been a tireless worker in his efforts to unify and strengthen the European economy. In his presentations he carefully explains the key role of France in fashioning the unified, prosperous and democratic future of Europe.

A charismatic and engaging speaker, he draws on his vast experience at the forefront of European politics to educate and challenge audiences at leading events world-wide.

He presents in French or English.