Sir Stirling Moss OBE is the greatest all-round racing driver of all time and a true icon of the motor racing world. In his professional career he drove 84 different types of automobiles in 495 events, finished in 366 of them and won an amazing 222 times. 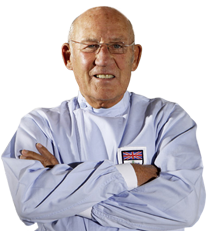 During qualifying for 2011 Le Mans Legends race he made the decision to retire from competitive racing but continues to get involved in car rallies. Also well known for his love of design and the latest gadget, in 2009 the Stirling Moss brand was created, which has led to the brand being licensed. Once the decision to retire from professional motor racing was made, Sir Stirling expanded his commercial interests with the same vigour that he employed when racing, chief amongst these being his property business. One of the original jet-setters, Sir Stirling remains in huge demand around the world to this day - a true British legend. In 2004 he received the Motorsport Industry Associated award for Most Outstanding Contribution to the UK Motorsport Industry.

Sir Stirling Moss is in great demand as commentator, lecturer and consultant on everything that involves Formula 1 and design. He offers audiences the benefit of his business expertise and his extensive and successful career in the motor racing industry.

Sir Stirling is no stranger to public speaking and his relaxed informal style is always well received whenever he makes one of his memorable appearances.