Rebecca Adlington has been described as the greatest swimmer that Great Britain has ever produced and she shares the record as Great Britain's most decorated female Olympian with 4 Olympic medals to her name.

She took the motto and legacy of the 2012 Olympics 'inspire a generation', to her heart and has since set up her own learn to swim program. Her ambition is to see every child in the UK leave primary school being able to swim 25 metres. She has now launched her "SwimStars" programme with great success.

"A fantastic ambassador for sport" 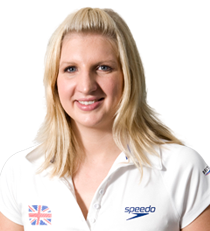 The extra special bonus in her career came by breaking the World Record in the 800m freestyle in Beijing in 2008. Since retiring she has taken part, in 2013, in I'm A Celebrity Get Me Out of Here and has appeared in a number of different TV shows. She has become part of the BBC punditry team in 2013. So far, she has had covered the World Championships in Barcelona and the Commonwealth Games in Glasgow.

Performing on the big stage at major events and collecting medals has been at the heart of Rebecca's desire and determination to succeed. She offers audiences insights into the sacrifices and sheer work required to achieve at the very top of your profession. Her bubbly character and sheer determination to win captured the hearts and imagination of the world when she achieved her life's dream of Olympic Gold. She also shares her business experience setting up "SwimStars".

Rebecca shares the tremendous feeling of achievement when the hard work comes together and gives glimpses of the satisfaction enjoyed from reaching the winning post first.

How to book Rebecca Adlington OBE?