Ray Kurzweil has been described as "the restless genius" by The Wall Street Journal, and "the ultimate thinking machine" by Forbes. Inc. magazine ranked him #8 among entrepreneurs in the USA, calling him the "rightful heir to Thomas Edison, America" 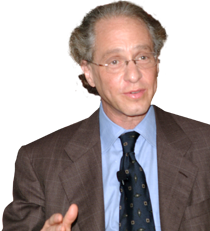 As one of the leading inventors of our time, Ray was the principal developer of the first CCD flat-bed scanner, the first omni-font optical character recognition, the first print-to-speech reading machine for the blind, the first text-to-speech synthesizer, the first music synthesizer capable of recreating the grand piano and other orchestral instruments, and the first commercially marketed large-vocabulary speech recognition. Among Ray's many honors, he is the recipient of the $500,000 MIT-Lemelson Prize, the world's largest for innovation. In 1999, he received the National Medal of Technology, the nation's highest honor in technology, from President Clinton in a White House ceremony. And in 2002, he was inducted into the National Inventor's Hall of Fame, established by the US Patent Office.

With unparalleled insights into what the future holds and how new technologies will affect the way we work and develop, Ray Kurzweil offers audiences an invaluable sneak preview of what is just around the technology corner.

An outstanding visionary Ray Kurzweil's fascinating hi-tech presentations are universally admired and enjoyed, furthering his reputation as one of the most important contributors to modern-day devices, systems and solutions.

How to book Ray Kurzweil?