Oliver Kahn is one of the world's best German goalkeepers of all times, having won eight German championships and six DFB Cups amongst others. For his outstanding athletic and personal achievements Oliver Kahn received the award for best player of the FIFA World Cup 2002. He was three times world's best goalkeeper.

"One of the greatest goalkeepers of all time" 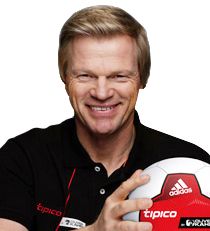 In summer 2008, after 22 years as a professional football player, Oliver completed an outstanding career. Oliver Kahn is a soccer expert for international matches and the Champions League for the ZDF. Motivation and leadership are central themes that Oliver Kahn deals with as an author and speaker. He established his own foundation - the Oliver Kahn Foundation - and the companies Titaneon Media AG and Fanorakel AG together with partners. In 2011, Oliver Kahn graduated successfully with a Master of Business Administration.

Oliver is an established figure on the corporate speaking circuit where he regularly recounts stories from his career covering topics such as motivation and teamwork.

An experienced speaker and broadcaster, Oliver's relaxed presentation style makes him highly sought-after at a variety of conferences and corporate events.

How to book Oliver Kahn?