Mikhail Gorbachev was the last leader of the Soviet Union, serving from 1985 until its collapse in 1991. His attempts at reform helped to end the Cold War. He introduced a policy of openness or "Glasnost" and he was also the architect of "Perestroika" and deep political and economic reforms. He was awarded the Nobel Peace Prize in 1990.

"The Face of Perestroika" 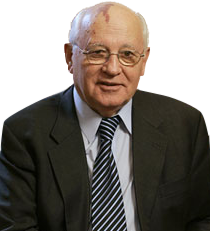 From 1970 to 1989 Mikhail Gorbachev was the Deputy Supreme Soviet of the U.S.S.R. as well as Chairman of the Foreign Affairs Committee of the Soviet Union between 1984 and 1985. He was Secretary for Agriculture between 1978 and 1985 when he took the position of General Secretary of the CPSU Central Committee until 1991. He was elected to the Congress of the People's Deputies of the U.S.S.R. in 1989 and became President of Russia in 1990. He is now president of Green Cross International and writes a regular column for the New York Times Syndicate.

As a former world leader, Mikhail Gorbachev is one of the most respected political figures in the international arena. He talks knowledgeably about the social, economic and political fallout of climate change and his vision for a greener world, the importance of world peace and the advantages of creating a sustainable future.

An engaging and powerful speaker, President Gorbachev speaks in great detail about the values he believes in and provides far reaching insights which challenge and captivate audiences around the world.

He presents in Russian.

How to book Mikhail Sergeyevich Gorbachev?