Michael Bublé is an internationally renowned Canadian jazz vocalist and entertainer. Bublé has been on five world tours and his To Be Loved Tour ran for 173 shows, 39 countries and was seen by over two million fans. In 2010, Buble headlined the Aviva Stadium in Dublin before l00,000 fans!

"I just love getting in front of people" 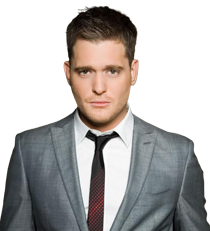 His debut album was an international smash, going Top Ten in the UK and Canada, and earning him his first Juno award for Best New Talent in 2004. The follow-up, It's Time, sold more than 5.5 million copies, and remained on the Billboard Traditional Jazz charts for a staggering two years and in the Number 1 slot for more than 80 weeks, an all-time record. While still in his teen years, he won the Canadian Youth Talent Search, released several independent albums, and performed in a musical review titled Swing that travelled across the U.S.

Michael Bublé has an extraordinary appeal whose irrepressible spirit, engaging humour, and confident charisma once led the New York Times to call him "an entertainer who is completely at home on the stage". He is at the beginnings of a very long career, having honed his skills as a showman through years of performing in hotel lounges and smoky bars.

Michael Bublé hasn't just learned this music, he's lived it. He exudes youthful energy in his unforgettable performances, tough and tender at the same time and like nothing else ever heard.

How to book Michael Bublé?