Jonathan Ansell is one of the UK's most popular young Tenors. He shot to fame with pop opera group G4 on the X Factor. When they split in 2007 Jonathan was propelled to instant stardom as a solo artist, shooting to the top of the charts with his first album Tenor at the Movies. His second album Forever was a huge critical success. He has recently enjoyed a transition into musical theatre.

"I love entertaining people and touching them with what I've been lucky enough to be blessed with; my voice" 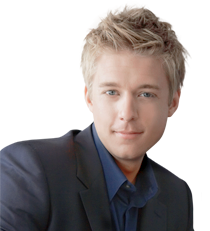 Jonathan continues to sell out theatres all over the UK as a solo star, including London's Royal Albert Hall, Elgar Room. He has played the lead role in Carl Rosa's The Mikado, dueted with Hayley Westenra in the presence of Her Majesty The Queen at the Royal British Legion Festival of Remembrance. His countless radio and TV shows include, Friday Night is Music Night for BBC Radio 2 as performer and host, The Weakest Link, Who Wants to be a Millionaire, The Alan Titchmarsh Show, Ready Steady Cook, among others and as the winner in Celebrity Come Dine with Me.

Jonathan will tell all his "behind the scenes" stories and reveal the secrets to his phenomenal success. The charismatic young singer with the sensational tenor voice is much in demand for corporate appearances.

Jonathan is hugely popular, accompanied by friends on piano and guitar; he creates a wonderful atmosphere singing both operatic and traditional classics, contemporary hits and theatrical show tunes as well as favourites from his solo and G4 chart-topping albums.

How to book Jonathan Ansell?