President of the European Commission

Jean Claude Juncker is one of the most recognised leaders in Europe. In 2014 he was elected President of the European Commission. For almost 20 years Mr. Juncker served as Prime Minister of Luxembourg and from 2005 until 2013, he was President of the Eurozone and was instrumental in leading Europe through the financial crisis. Mr. Juncker has been recognised with numerous prestigious awards for his contributions to Europe.

"One of the leading figures in European Politics" 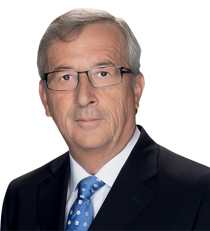 Mr Juncker was Luxembourg's Minister for Finances from 1989 to 2009, was appointed Prime Minister in 1995 and then re-elected in 1999. The second term he coincided with significant changes in Europe's political and economic constitution. He stood out as one of the key players in the creation of the Maastricht Treaty, in particular of the volume concerning the Economic and Monetary Union of which he wrote large sections himself. Jean-Claude Juncker has also been Governor of the World Bank, Governor of the International Monetary Fund and Governor of the European Bank for Reconstruction and Development.

A world-wide respected politician and brilliant economist, Jean Claude Juncker brings a wealth of useful information to decision makers from all businesses wishing to expand their operations in Europe.

His efficient leadership skills and outstanding rhetoric qualities make Jean-Claude Juncker one of the most sought after speakers at prestigious conferences world- wide.

He presents in English, French and German.

How to book Dr. Jean-Claude Juncker?