Jagdish Bhagwati is a world wide noted macro economist and supporter of the free trade.Repeatedly a candidate for the Nobel Prize of Economics he now lectures at the Columbia University in New York. Previously he has served as an external advisor to the Director General of the World Trade Organization and as a policy advisor on globalization to the United Nations. Like no other he defends globalization as a process to wealth creation and social progress and change. 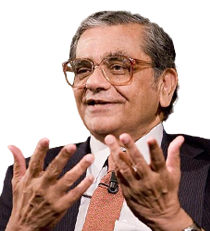 He has published more than three hundred articles and writes frequently for The New York Times, The Wall Street Journal, and The Financial Times. Several of his scientific writings and two of his public policy essays have been published by MIT press. The recipient of six festschrifts in his honor, he has also received a number of prizes and honorary degrees. He currently serves on the Academic Advisory Board of Human Rights Watch (Asia) and on the board of scholars of the Centre for Civil Society.

An unbowed apologist for free trade Professor Bhagwati provides audiences with his critical view on global economic trends and specifically the impact, dangers and advantages of the new global economy. He offers invaluable insights to decision makers and shows how organisations can successfully take advantage of globalization and in the process trigger social change, create wealth and become global powerhouses.

Regarded world-wide as a pre-eminent economic analyst Prof. Bhadwati's brilliant and detailed presentations are an essential guide for organisations across the world.

How to book Professor Jagdish Bhagwati?