FW de Klerk was one of the main architects of South Africa's constitutional democracy. During his presidency, he played a central role in initiating and managing the transformation process that helped to resolve centuries of inter-community conflict and create a basis for peace between the many varied communities.

"A renowned and respected leader for Human Rights" 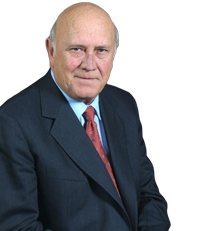 FW de Klerk is best known for engineering the end of apartheid, South Africa's racial segregation policy, and supporting the transformation of South Africa into a multi-racial democracy by entering into the negotiations resulting in all citizens, including the country's black majority, having equal voting and other rights. He shared the Nobel Peace Prize along with Nelson Mandela in 1993 for his role in the ending of apartheid. He established the Global Leadership Foundation in 2004, a foundation whose objective is to play a constructive role in the promotion of peace, democracy and development.

F.W. de Klerk shows audiences the importance of strong leadership. He draws on the lessons he learned from his struggle and eventual triumph over apartheid to motivate and inspire audiences around the globe. Decision makers from all fields will benefit from his deep political insights and wealth of experience as a world leader.

An engaging and insightful speaker, Mr de Klerk is in great demand by audiences eager to benefit from his experiences as the key player in the transformation of South Africa into an economic powerhouse.