The Greatest German Footballer of All Time

Franz Beckenbauer voted twice as European Footballer of the Year and widely considered the greatest German player of all time, is one of three men to have won the World Cup both as a player and as a manager. Today, Franz remains an influential figure in both German and international football. 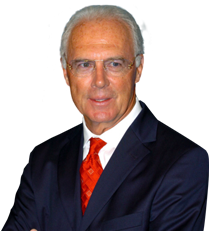 Franz was part of the Bayern Munich team promoted to the Bundesliga, and a succession of honours quickly followed: four German championships, four Cup winners' medals, three European Cup triumphs, the Cup Winners' Cup and the World Club Cup - all of them with Bayern. However, the Kaiser's crowning glory as a player was a World Cup winner's medal in 1974. After 396 Bundesliga appearances and 44 goals, he left Bayern to play for New York Cosmos and for Hamburger SV. He became team manager and later President of Bayern. Franz was a member of the FIFA Executive Committee. He has been Honorary President of Bayern since 2009 and was Vice President of the German Football Association.

Franz offers audiences great insights into his highly successful football career. Drawing from his background, business leaders will be eager to learn about his impressive leadership skills and his strategies how to create successful business teams.

A globally recognisable figure, Franz is highly inspirational and engaging and his presence will add prestige to any event.

He presents in German or English.

How to book Franz Beckenbauer?