Lord Holmes is Britain's most successful individual Paralympic swimmer ever; winning nine gold medals, five silver and one bronze. Chris was the LOCOG's Director of Paralympic Integration, responsible for the Paralympic Games for 2012. Prior to this he was a commercial lawyer at a leading City practice.

"Chris is knowledgeable, approachable and has the ability to enthuse and inspire and instil confidence in the audience" Hilt 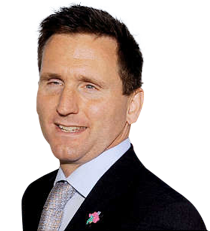 Chris is a former Disability Rights Commissioner where he served on the board, audit and legal committees for five and a half years. He was also an ambassador to the successful London 2012 Olympic and Paralympic Games bid where he was closely involved in securing the top sporting prize for this country. He is a patron of the Youth Sport Trust, the British Paralympic Association and Help for Heroes. Over his sporting career he has won, a string of World and European titles, broke 35 World Records and was awarded the M.B.E. for services to British sport. He is a member of the board at UK Sport where he was heavily involved in ensuring that the performance pathway for the athletes competing at the London Olympic and Paralympic Games in 2012 were soundly in place.

Chris' presentations take his audiences on the journey from loss of sight over night, aged 14, to gold medallist and World record holder, aged 20. Chris has considerable experience of public speaking, communications and engaging with commercial, community, public sector and governmental organisations in the UK and internationally.

Through his ambassadorial role with the London 2012 bid he has worked closely with officials across Whitehall and undertook many influencing engagements with foreign ambassadors from across the World to promote Britain and the bid. He is able to communicate passionately the sporting and business messages from his own life but transcend this and create connections and relevance to whoever his audience may be.

How to book Lord Holmes MBE?