Sir Chris Bonington is one of the most successful expedition leaders in the world having led the teams that made the first ascents of the South Face of Annapurna and the South West Face of Everest. He has been at the cutting edge of climbing for several years making first ascents of twenty peaks in the greater ranges of the world. 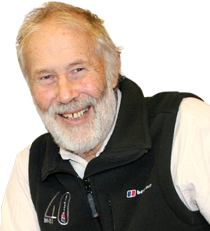 Chris is President of the British Mountaineering Council and President of the Council for National Parks. He is also Chairman of Berghaus, Britain's most successful outdoors clothing brand. He has been awarded the prestigious Founders Medal of the Royal Geographical Society, been made a Commander of the British Empire and received a knighthood in 1996. His ascent of the Ogre with Doug Scott in 1978 was only repeated after twenty attempts in 2002. He still climbs actively and made a first ascent of an unclimbed peak in the Kulu range of the Indian Himalaya in 2003.

Chris Bonington is more than just a mountaineer, writer and lecturer. He is now one of the country's leading motivational speakers for business. Chris talks you through his expeditions, making the links between what he does so successfully on the mountain with business today. Audiences are inspired, thrilled and more than ready to climb their own Everest.

Leading the way with audio-visual presentations, Chris is now going digital. This enables him to use his stunning visuals, computer animation and video all together in his engaging presentations.