Sugababes are one of the most successful girl groups of the 21st Century. To date, the band has sold over 2 million singles, hitting Number One five times. They've sold more than five million albums (including three triple-platinum discs in the UK) and have amassed more Top 10 singles than other girl bands and more Top 10 hits with original songs than any girl group since The Supremes. They're also the first girl group since the 1980s to release more than three hit albums.

"One of the most successful girl bands of recent times" 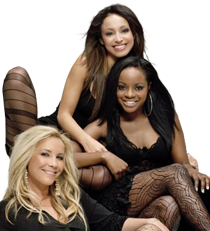 During this time the band have become synonymous with imaginative, cutting edge, daring and effervescent pop music, turning in several defining moments in the modern pop era along the way and picking up plaudits including: a BRIT award (along with various nominations), a Q award, a Smash Hits award, two TMF awards, 2 Capital Radio awards, two Elle Style awards and a Glamour gong.

Sugababes are a dazzling, sassy and energetic group whose performances will have audiences singing along to their songs and on their feet throughout the show.

Sugababes shows are melodically captivating and have a mass audience appeal. By using minimum onstage props they allow audiences to witness how well each of the girls can sing, with each member proving just how much they deserve their place in the spotlight.

How to book Sugababes?